Fish sauce is a salty and savoury ingredient that is quite a popular condiment. Fish sauce is the essential ingredient in Southeast Asian, Thai, Vietnamese, and Cambodian dishes. It is used to marinate meats, stir-fries, kinds of pasta, salad dressing or add to the soup to punch the flavour. It adds an “umami” taste to many dishes such as pad Thai noodles, green papaya salad and many more popular dishes. But what would you do if you don’t have fish sauce substitute, what will you do? This complete guide is the answer of this question. So let’s begin.

What is fish sauce?

Fish sauce is an ingredient that smells quite gross but makes food tastier. It is available as a liquid ingredient that adds a salty and savoury flavour to dishes. Fish sauce is made by coating fish in salt and letting them ferment in large jars for almost two years. After all, this process puts the sauce in bottles and uses it to add flavours to recipes. It is mainly a salty nut. It can even use to add a sweet flavour.

Why we use fish sauce substitute?

Indeed, fish and seafood meat are part of our balanced diet. It is the most significant nutritious source of omega fatty acids for the human body. It is hard to get an alternative to fish sauce, but often it is compulsory to use it in place of fish sauce. Its need may arise when a recipe calls for fish sauce.

Fish sauce substitute may arise in many cases, such as:

Here is the list of sauces alternatives you may use in place of fish substitutes, some of which are vegetarian-friendly.

5 best substitutes for the fish sauce:

Soy sauce is the perfect substitute for fish sauce and an option for vegans and vegetarians. It is available in liquid condiments and made with fermented soybeans, water and salt. You can use soy sauce as a substitute at a 1-to-1 ratio.

You can mix soy sauce with vinegar and lime juice to get extra flavour. Soy sauce is darker, thicker and sweeter than salty fish sauce. It is the best condiment to use when cooking because it has a rich umami flavour due to amino acids in soybeans.

One tablespoon of soy sauce contains:

Tamari is a Japanese popular soy sauce alternative known as shoyu. You can use it instead of fish sauce because of its salty flavour. Tamari sauce contains water, organic soybeans, salt, and miso paste. It is less salty than soy sauce due to its higher soybean protein content. It helps in the digestion of fruits and vegetables.

Tamari soy sauce is rich in several minerals and a source of vitamin B3, Protein, manganese and tryptophan. You can swap it with fish sauce at a 1-to-1 ratio. If you want to reduce the taste, take a cup of tamari and add water to get the desired texture.

Oyster sauce is a famous Cantonese sauce, and it is also a fish product. However, it is unsuitable for vegans and persons with fish shell allergies. People could find the oyster sauce to be a good substitute who does not like fish sauce’s gross smell.

Oyster sauce offers a similar flavour to fish sauce butt has a thicker texture than fish sauce. You can add water to the oyster sauce to make it thinner. If you want a good alternative, add an equal amount of fish sauce.

Oyster sauce is primarily used in stir fry recipes and fried rice. It is a low-calorie fish sauce substitute and an excellent option for those looking to add a considerable flavour while watching calorie intake.

A tablespoon of oyster sauce may contain as much as 4 grams of sugar, while fish sauce contains no sugar. It is primarily available in the dark brown caramel colour, made from oyster extracts, sugar, salt, and thickened with cornstarch.

A tablespoon of oyster sauce has:

However, it is essential for those who are conscious of a balanced diet that oyster sauce is not as rich in vitamins, minerals, protein and fibre as compared with other substitutes.

It can easily make at home, and you need ingredients such as shredded seaweed, water, garlic, black peppercorn, mushroom soy sauce, light soy sauce and miso paste. These ingredients bring the umami flavour to the meal. If you already have a vegan fish sauce, you can replace it with the original fish sauce on a ratio of 1:1.

Worcestershire sauce is made from various ingredients, including garlic, tamarind, chilli pepper, onion, sugar, anchovies, salt, vinegar and other flavours. It can add to noodles, dumplings, marinated meat and salad dressings. You can even sprinkle this substitute sauce over steaks, sausages or toasted cheese.

This alternative sauce is fat-free, so it is an excellent option for a person who wants to minimize dietary fat intake. Sodium is less in quantity than fish sauce, so it would be the best option for those who follow a low-sodium meal plan. It is thicker than fish sauce, but it can still use the same proportions in dishes. The ratio would be 1:1 as a fish sauce substitute.

One tablespoon of Worcestershire sauce has:

Your Fish Dish party is incomplete without the special fish sauce. A fish sauce can exceptionally enhance the taste. Suppose, if fish sauce is not available, what you would do? No worries, you can use fish sauce substitutes for this purpose. In this article, we have given you some ideas for an alternative to fish sauce. I’m hoping you would like it and pick up any sauce. It will boost your meal taste in a significant way.

What Does Duck Taste Like? Difference Between Farmed and Wild Duck 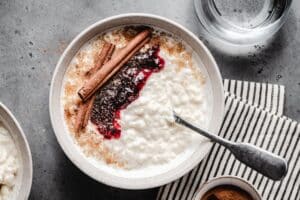 Do Rice Puddings Have Health Benefits?